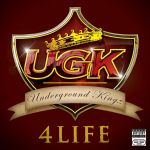 UGK, 4 Life (Jive, 2009)
To think, with all of the history I have with UGK (something like three years worth at this point), I've never listened to an album of theirs in its entirety. It's just too bad it had to happen under such unfortunate circumstances.

Holy shit! They got Pimp C saying he's back from the dead. That's just creepy. Then he calls himself both Dick Cheney and Tony Snow. The real Tony Snow died, too, right? Wow.

STILL ON THE GRIND

In case you thought he was done, Pimp kicks this one off by calling himself Jack Tripper. Then the music kicks in, and god this is awful. If Pimp C thought these synths, which sound like a four minute-long fart, were a good idea, that just goes to show his struggles with substance abuce.

As you might have guessed, the chorus to this one is Pimp repeating a few lines from that song they did with Jay-Z. I notice there's a lot of Pimp on this album so far, given the fact that he's been dead for over a year now. I figured this might be mostly Bun B, with the occasional Pimp C verse here and there.

The requisite song for the bitches. Lot's of pandering and simp talk. It's like that song "Independent" meets "Whatever You Like," minus any potential commercial appeal.

THE PIMP & THE BUN

This one kinda cranks. It reminds me of the kind of shit I used to listen to in the car with my old man back in the mid '80s. Ron Isley on the chorus feels tacked on.

Some of the nastier sex raps I've heard in a minute. Pimp C was quite the horn dog, wasn't he? Nullus. I notice he likes to use a particular construction that involves a woman sucking his dick as if it was [insert some kind of food, like corn or a chicken wing]. It's all over this album.

Presumably, this is meant to kick off the substance abuse portion of the album. I'm all for taking your mind off of the sick, sad world we live in, but Pimp C probably took things a bit too far. Well, obviously.

It might take being high on weed to truly appreciate this. It reminds of something Devin the Dude might do, except not quite as funny. But just as half-assed and morbid.

The political side of Pimp C. The things we learn: 1) Dick is a commodity; 2) The government got all the drugs; 3) Pimp C spoke a certain way so people would think he was dumb.

Just gross, and it makes wonder what Pimp C might have been up to when he was in the joint.

A rip off of that song by Mike Jones about how hoes used to not want him.

An actual song about pimping. Not just banging a lot of broads, but making hoes sell pussy. Of course, there's guest verses by Snoop Dogg and Too Short.

Bun spits a verse about how he's representing for his hood or whatever.

A song with motherfucking Akon. It sounds a lot more like an Akon song than a UGK song. It's probably something that wasn't good enough for his own album. The song's title refers to Akon's dick, btw. No homo.

Wait, have I heard this before? I remember pointing out the Crumb reference the first time I heard it. I was comparing women in hip-hop to R. Crumb drawings before it was all trendy. That's probably where Bun B got it from.

DA GAME BEEN GOOD TO ME

Bun B rambles on about how UGK is forever. Um, define forever.

COMMENTS: I've listened to a couple of Bun B solo albums, and those were just awful. I found this way more listenable. It's basically '70s and '80s era R&B music, with a guy comparing his dick to various different kinds of food. I've never heard so many references to dicks, and fucking, and assholes and what have you on an album. If the grooves weren't so half-assed, as is the case with most hip-hop with live instrumentation, it might actually be worthwhile as a sork of Wesley Willis-style outsider art.

UGK, 4 Life (Jive, 2009)
To think, with all of the history I have with UGK (something like three years worth at this point), I've never listened to an album of theirs in its entirety. It's just too bad it had to happen under such unfortunate circumstances.