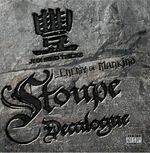 Stoupe, Decalogue (Babygrande, 2009)
I wasn't as crazy about that last Jedi Mind Tricks albuim. But part of it was because I don't find that one guy, who's back in the group now, to be a very good rapper. This is more of a showcase for the producer, Stoupe, whose work I generally enjoy.

The kid rapping sounds like a younger Vinnie Paz. It doesn't make for a bad fit, but it's not much of a departure from the same ol' Jedi Mind Tricks.

WHEN THE SUN GOES DOWN

Same goes for the production. This could have just as easily been on the last couple of Jedi Mind Tricks albums. Saigon does the raps on this one, and it makes me wonder what would happen if him and Stoupe collaborated on an entire album. Never mind Statik Selektah.

I don't recognize the names of the guys rapping on this. They must be the guys who carry Stoupe's drugs when he goes out places. As far as these things go, they aren't bad, but they aren't particularly memorable.

The whistle in this one is a trip. I've never heard anything quite like it, even on an Andrew Bird record. It sounds like it might from the soundtrack a western, like that shit they play when two guys are about to have a shootout.

The one with Joell Ortiz. The production has actually been adjusted to fit his rhymes. It's got a bit of a latino feel. The rest of the beats so far have sounded like throwaways from the last couple of JMT albums, but then the MCs on those tracks didn't sound altogether different from Vinnie Paz. Hmm...

The "Paid in Full" drums. Um, why? Once the initial bit of recognition wears off, you can't help but be bothered by the familiarity, in a "could I have done this" sort of way. It's silly, since I doubt the actual technique varies much from track to track.

The one with Outerspace. If I'm not mistaken, they had their own JMT weed carrier album. I wonder if the production was any good. If it was, it may have been worth DLing and having a look.

I was hoping this track with M.O.P. would bring a higher energy level than it does. The production is more mid tempo and introspective than it is.., you know, "Ante Up." It's still fucking killer. I wish there were more appearances by big name rappers on this album. Imagine Nas on, like, any of these beats.

I skipped this one to check my email. It was probably alright. At the very least, it wasn't offensively bad or anything.

A collaboration with a female vocalist who almost sounds more like a sample. They should have gotten that girl from My Brightest Diamond. She could talk me into pretty much anything on the basis of her voice alone.

COMMENTS: While this is billed as a producer's compilation, like that (awesome) Jake One album or some such, the only really big name guest on it is M.O.P. As such, it comes off more like a weed carriers album, but with different weed carriers on each track. A sort of weed carriers compilation, if you will. A lot of these guys aren't half that bad, and this definitely isn't a bad listen. But I can't help but think I would have liked it a lot more if it was a proper Jedi Mind Tricks album, sans that one guy. Vinnie Paz couldn't have been that busy. He doesn't strike me as the kind of guy who's involved in a lot of activities.

BONUS VIDEO: Did you know Bill Paxton is a big fan of Jedi Mind Tricks?

Stoupe, Decalogue (Babygrande, 2009)
I wasn't as crazy about that last Jedi Mind Tricks albuim. But part of it was because I don't find that one guy, who's back in the group now, to be a very good rapper. This is more of a showcase for the producer, Stoupe, whose work I generally enjoy.