Never mind Erykah Badu twittering during the birth of her latest baby by a failed rapper. Diddy just twittered while balls deep in some woman. Nullus. 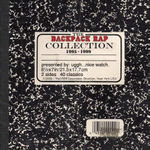 Put together by Brendan "Good Cop" Frederick, it's a collection of classic, late '90s era nerd rap. Most of this shit I haven't even heard since it was relatively new. I might have to cop a case of Natty Light for old time's sake. Word to Freddie Jackson.

Only thing is, knowing Brendan, who's into that whole ironic appreciation of LCD rap thing, I'll DL and have a look, and this shit will turn out to be a bunch of garbage by Rich Boy or somebody, just to toy with my emotions.

I bet this is the most accurate chart evar 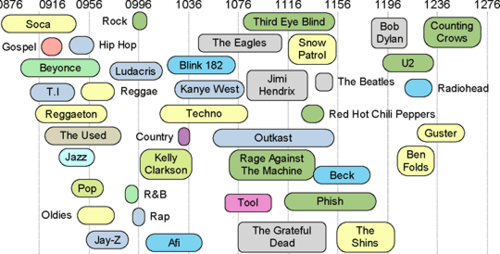 Except, Counting Crows could be a little further to the right.

(Note: The x-axis represents SAT scores. Also, I might have already posted this a long time ago. My bad.) Episode 8. So this means I've been up to this for a month now, albeit minus the two weeks I was at work, and none of the guys in the house has banged any of the girls in the house, or anyone else for that matter. The only one who's even drinking heavily is the teh ghey latino kid. MTV is gonna have to do a better job of screaming the roomies next season. Having a girl with huge tits and a few fruits isn't gonna cut it, especially when the girl with huge tits is a black chick with delusions of grandeur.

Work with me, MTV!

You can tell none of the guys in the house is really straight, because they're complaining about how messy the girls. Admittedly, I'm sure it's difficult to deal with hair lying around all over the place. Obviously, I don't have that problem as much with my own hair. And if they're not making an extra special effort to get rid of whatever they use to cover up the fact that they're constantly bleeding, then yeah, that would be gross. And yeah, it would be difficult for me to deal with the fact that there's dirty dishes all over the place, and yet, there's three and a half women in the house.

Come to think of it, the guys might have a point. If I was one of the roomies this season, my goal would be to have sex with one of the three girls that's actually a girl, if only so it'd be preserved on video for posterity, but also becuse I'd probably enjoy it. Even the girl from Hot Topic. But if sex was out of the question, they could at least keep the house in decent order. What else are they gonna do, sit around all day playing with their own privacy? That's what I'd do, if I was in that position.

This is why it's important to show up to the polls

When I was about 20 years old, I went to this family reunion on an island off the state of Texas, then the next week we drove from there to Florida, across whatever that highway is that runs across that part of the South. Pimp C would know, but he's been dead for a while now.

We ended up spending the night somewhere in Louisiana, and I remember, when we pulled off of the highway, we encountered two motels, on either side of the highway. One had a big sign out front that said something along the lines of, "The one on this side of the street is owned by an American."

We ended up going to the one on the other side of the street, because it looked like it might be cleaner (you know you can't be taking too many chances with these motels), and wouldn't you know, it was run by some damn Indian people.

It hadn't occurred to me until just now that Louisiana might be overrun by Indian people. How else to explain the fact that they've got an Indian governor? Politics aside, you'd think a state would have to be 51% Indian to elect an Indian governor. But maybe I've just spent too much time working in retail. In all likelihood, there probably just wasn't a very good turnout the year Bobby Jindal was elected.

The other day, I read a story in the New York Times about this neighborhood in Queens that's getting overrun, and I'm pretty sure something similar's happening not too far from where I went to high school. And I woke up this morning, and I saw everyone was talking about this godawful speech Louisiana Gov. Bobby Jindal gave last night. I was at work last night and didn't get to see it. I still haven't seen it, but I heard he sounded like the guy who plays the page on 30 Rock.

The Republicans probably sent him out there thinking he might have a chance at becoming their own Barack Obama. He's a minority, and healthy-looking, and was a Rhodes Scholar. If he doesn't get the nomination in 2012, he could become Fox News' equivalent of Rachel Maddow. Only thing is, no one thought to check whether or not he could deliver a speech.

And now that we know he can't, he might be double fucked, in that everyone in Louisiana is gonna know they've got an Indian governor. Already, I heard someone altered his Wikipedia page to say that he was a terrorist. Mark my words: this is probably gonna be his last term.

After the jump is an hilarious video Sandra Rose found of Chris Matthews saying, "Oh, God," as Bobby Jindal took the stage last night. For all of the talk about Keith Olbermann and Rachel Maddow, Matthews might actually be my favorite. No homo. If you get a chance, you should check out the great profile of him in the Times Magazine last year.

Is King having a laugh at Christina Milian's expense?

For the last couple of weeks, King magazine's website has had this feature where you're supposed to guess who was gonna be on the cover of their big 50th anniversary issue next month. Every day, they'd narrow down the list of girls who it might be. I kept checking back, because I thought it might be Esther Baxter, and that she might have gotten her body back together.

Alas, it turns out that it's Christina Milian. Who? I had to consult Wikipedia to remind myself who she is. Apparently, she once had a song with Ja Rule. (There's a pretty good picture of her in Wikipedia, by the way.) And it occurred to me: What if selecting Christina Milian was an ironic comment on the fact that so many King covers have featured black female celebrities who haven't done anything notable in years and years?

Or is that a bit too meta for a black men's magazine?

Anyhoo, Dallas Penn, who must be independently wealthy[1], kept going on about this King magazine party, so I figured I might consult the Google to see if I couldn't find the pictures. I could, and I've posted them after the jump for your viewing pleasure.

[1] If you notice, he goes out every night of the week, he stays sending me free shit, and obvious he could care less about updating his XXL blog.

Continue reading "Is King having a laugh at Christina Milian's expense?" » As I mentioned once in a post for XXL, it's always neat when my various interests overlap like this. If only Fiddy could have brought in a video ho, like that time Flo Rida was on.

And after the jump is the great video of the time Flo Rida was on.

Sweet, Dinosaur Jr. is back (again)

I heard on Sirius' indie rock station on the way to the BGM yesterday that Dinosaur Jr. is on Jagjaguwar now and has a new album coming out this summer. Then I rolled off the couch just now and found these awesome videos on Pitchfork.tv. Bonus!

My bad, if you could care less about Dinosaur Jr.

My hairline > this ninja's hairline 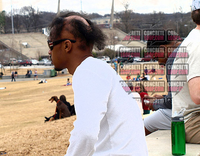 Seriously, my shit's not even that bad. It's more thin than it is bald at any given point.

Never mind what the Internet Soldiers are talking about. They're just mad that the new Joe Budden album is on a fake label for people who can't even get signed to Koch, and that it has the most obnoxious production of any album since the first Lupe Fiasco.

This guy from Kris Kross, on the other hand...

I guess he made the mistake of going to the park to cop some drugs without getting his combover game right. Lots of kids were there, but it's not like anyone under the age of like 25 would know from Kris Kross. They're making a movie out of the third season of the Real World, fer chrissakes.

One of the girl's from Concrete Loop must have been there and took some pictures, which has lead to speculation that he might have cancer. I think he did have cancer back in the '90s. That's why he was bald on the second, or was it the third album?

I'm not gonna lie - I had the first Kris Kross album on cassette. But by the time the second one came out, a 12 year-old Bol was far too grown for that sort of thing. Then it must have been the third album, when he was rocking the chemo patient look.

In a video after the jump, put together by some sub-Concrete Loop "urban entertainment site," he sets the record straight. Turns out he suffers from alopecia. As I recall, that's why 2Pac cut all of his hair off. If only he'd had the ball(s) to let it grow wild like this guy.

Noreaga on Kanye: "Ain't nothing wrong with loving cock"