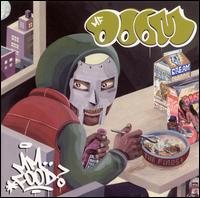 MF Doom, MM...Food (Rhymesayers, 2004)
Faithful readers, I hereby take back everything bad that I ever said about MF Doom. Except for the fact that not all of his albums are as good as people make them out to be. Because that's actually true.

But the thing about those other albums is that they weren't really MF Doom albums anyway. They would either be Doom rhyming over some other kid's beats (which, even if they were good, couldn't compare to Doom over his own beats), or other people rhyming over Doom's beats (like the King Geedorah album, which I actually liked a lot) or just Doom's instrumentals with nobody rhyming on them.

So it's good to hear Doom back in full force for, really, the first time since I was like a Freshman in college. Just listening to this makes me want to go pick up a 12 pack of Natty Light. In fact, I think I will when I'm done with this.

Actually, I just got off the phone with a chick and now I've got a job interview at 1 pm. Which means I probably won't be drinking until like 3 regardless of how it goes. Either way, it looks like I'm not far off from having something now. Probably by the end of next week.

OK, I realize none of this has anything to do with the actual music, so here: This song uses the same exact sample as something that Madlib flipped on Champion Sound, which I once famously claimed was better than Madvillainy. Actually, I still think that's true.

I don't think anybody really likes early '80s R&B except for O-Dub and his tiny legion of sycophants over at Soul Sides, but Doom seems especially good at flipping that shit and making it that much less gay.

Another one of these random audio collage things that he's always doing. Sometimes these things will be really wacked out if you listen to them. For example, there was this one on the King Geedorah album that was just really homophobic.

Not even "funny homophobic," but "actually kinda creepy homophobic." Other times, they'll be kinda creepily racist too. Doom is obviously suffering from the same affliction as Mos Def as far as that's concerned.

Good, another non rap song. At least it's short. Also, as the Dude would say, it makes the whole album hang together.

Did anybody else see that one MTV True Life about the really fat teenager who was about to get gastric bypass surgery and was throwing a fit in the store because him mom wouldn't buy him a pack of Fig Newtons? Those things really aren't good for you.

If there is a downside to this, it's that Doom doesn't actually rhyme quite as much on this as he did on Operation Doomsday and Vaudeville Villain. I know that was also an issue with the King Geedorah album and the second Viktor Vaughn, but the thing is, you can't really fault the guy just because he's still way more productive than the rest of these jigs.

DCOY likes to drink Guinesses. I guess I like to drink them too, but I'm not crazy about them like some people. If you ever get a chance, check out this drink called the black and black. It's one of those beer mixes, not unlike a black and tan, made out of Guinness and blackberry brandy.

This almost sounds like it could be from the score to an Andy Sidaris movie or something. It's definitely got an early '80s vibe to it. I like how, a lot of times, Doom will just kick one long ass verse and not even sweat having any kind of traditional song structure.

This Mr. Fantastik guy is just great. I could use a whole album of him over MF Doom beats. What the hell is that in the loop anyway, a guitar solo?

Vomit isn't an actual food, unless you're into really kinky sex or some shit. Anyway, these song titles don't seem to have much to do with the actual songs themselves. It's all just a setup for Doom to ramble at length about whatever.

Take for example this song. It has nothing to do with cookies, as far as I can tell. It's certainly awesome like a cookie. But not a Fig Newton though; those things aren't good for you at all.

COMMENTS: MF Doom is fucking back, bitches. Like I said in my review of that shitty Nas album, I know people have gotten the idea that I just like to sit around and hate on rappers' albums for my own personal amusement. But the simple fact of the matter is that a lot of the rap albums coming out these days just fucking suck. The cool thing about MF Doom is that he just sticks to doing his own thing regardless of what everybody else is doing. It's only too bad that there aren't more rappers like him.

SOMETHING TO THINK ABOUT AND DISCUSS: This MTV show MADE is fucking awesome. I feel like a total 8th grader for watching it, but fuck it, those are some good fucking stories. If I wasn't 23 years old, I'd try to get made into something. MTV, my name is Byron and I want to be made into a guy who has sex with young girls often.

MF Doom, MM...Food (Rhymesayers, 2004)
Faithful readers, I hereby take back everything bad that I ever said about MF Doom. Except for the fact that not all of his albums are as good as people make them out to be. Because that's actually true.