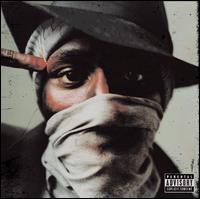 Mos Def, The New Danger (Geffen, 2004)
Attn Mos Def: Nobody wants to hear you sing or your untalented friends play guitar. Please shut the fuck up and rap like you used to.

OK, this is bad already. I don't like it when he sings anyway, but even if you did, I don't think you could defend this crap. The lyrics are dumb and the melody is weak. Still, I can let that slide because it's the intro.

But what the fuck is this bullshit? This shit is like, straight up rap metal. Rap metal doesn't all of a sudden become a good idea just because a jig does it. Also, some lyrics or... you know, a point would be nice.

OK finally a rap song, but is it any good? Nope. Something's off with the mix; I can't hear the lyrics. Did Mos try to produce this shit himself? What would one have to be on for this to sound like a good idea? I can tell you it's not Miller High Life Light, because that's what I'm sipping right now.

Oh goodie, a cross between tracks 2 and 3! As if I needed proof that 2 bad ideas don't equal 1 good one. I can't believe he just mentioned Limp Bizkit again. I used to take him seriously. I guess we were all young once.

OK, we get it, Mos: You don't like white people (especially the quarterwit). Me neither. I was hoping you would do something really interesting with this album, like go after the Chinese. I heard those fuckers were bootlegging your shit. In fact, that's where I got my copy.

Bruce Lee ain't got no sooooouulll / Mike Tyson is rock and roll / You may dig on "Yan Can Cook" / But Mexicans invented the Happy Box anyway...

See that's what he should've been singing about. Not that he should be singing anyway, but you know. Whatever this is, it's not any good either.

Finally, a mediocre rap song! I mean, it ain't no good and in fact, it might've been the worst track on Black on Both Sides had it been on there, but compared to the first 7 tracks on this, it's fucking golden. Somebody get this jig an Emmy.

More mediocre rap goodness. This time with a sample of that "Let the Sun Shine in" record. Not used in any interesting way, just used.

Again, not as good as the worst song on BoBS. Actually, it might be better than that one where he was singing that wasn't "Umi Says," but is that the standard by which we're to judge new Mos Def records? I've taken shits that were better than that song.

Surprise, a rap song called "The Panties" isn't actually any good. Was the Miz involved in this crap? What the fuck?!

Take Ghostface's "The Watch," subtract all traces of goodness, add some jigs I've never heard of and what do you get? "Grown Man Business," baby.

I got about 2 minutes in and I turned it off. Sorry. It didn't sound like it was going anywhere.

Yeah it is. Real gay. Months at a time can go by without any good rap albums coming out.

Ooh, this is real bad! Like real bad. Like "stick at the end of an album that wasn't any good to begin with" bad.

So yeah, this wasn't a very good album at all. In fact, it's bad enough that, if he wasn't already famous, he'd be working at a White Assholes after he put this crap out. I have no idea why it's this bad, but if it was because he was busy acting or whatever, couldn't he have just repackaged his old shit and put that out again? White people would've bought it anyway; they're wealthy like that.

On a related note: Does anybody else find it amusing that this kid hates white people so much and yet, these motherfuckers keep paying him out the ass? Hey, I hate white people too! Please send me your checks and your women.

Mos Def, The New Danger (Geffen, 2004)
Attn Mos Def: Nobody wants to hear you sing or your untalented friends play guitar. Please shut the fuck up and rap like you used to.